From OpenSeesWiki
Jump to navigationJump to search

This example demonstrates how to perform a pushover (nonlinear static) analysis in OpenSees using a 2-story, 1-bay steel moment resisting frame. In the first model, the nonlinear behavior is represented using the concentrated plasticity concept with rotational springs. In the second model, the nonlinear behavior is represented using the distributed plasticity concept where the plastic behavior occurs over a finite length. The rotational behavior of the plastic regions in both models follows a bilinear hysteretic response based on the Modified Ibarra Krawinkler Deterioration Model (Ibarra et al. 2005, Lignos and Krawinkler 2009, 2010). For this example, all modes of cyclic deterioration are neglected. A leaning column carrying gravity loads is linked to the frame to simulate P-Delta effects.

The files needed to analyze this structure in OpenSees are included here:

All files are available in a compressed format here: pushover_example.zip

The rest of this example describes the models and compares their analysis results. The OpenSees models are also compared to an equivalent model built and analyzed using the commercial program SAP2000 (http://www.csiberkeley.com/products_SAP.html). 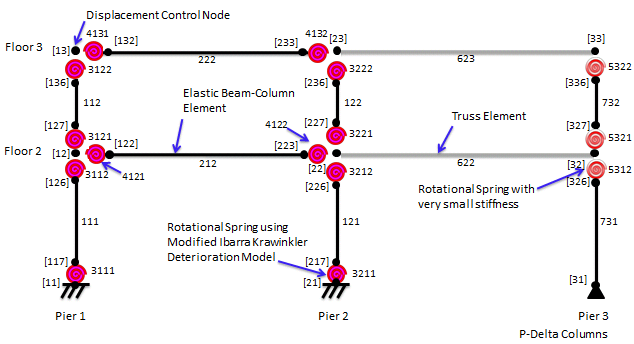 Figure 1. Schematic representation of concentrated plasticity OpenSees model with element number labels and [node number] labels. Note: The springs are zeroLength elements, but their sizes are greatly exaggerated in this figure for clarity.

The 2-story, 1-bay steel moment resisting frame is modeled with elastic beam-column elements connected by zeroLength elements which serve as rotational springs to represent the structure’s nonlinear behavior. The springs follow a bilinear hysteretic response based on the Modified Ibarra Krawinkler Deterioration Model. A leaning column with gravity loads is linked to the frame by truss elements to simulate P-Delta effects. An idealized schematic of the model is presented in Figure 1. 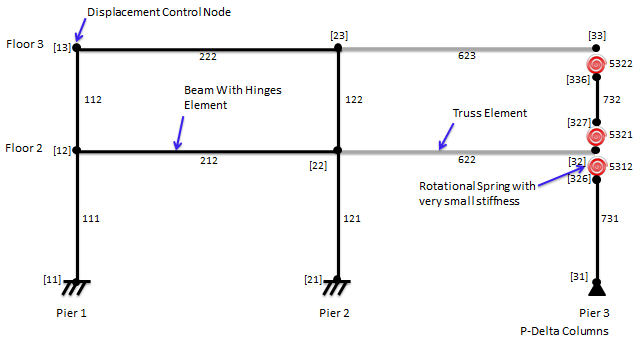 Figure 2. Schematic representation of distributed plasticity OpenSees model with element number labels and [node number] labels. Note: The springs are zeroLength elements, but their sizes are greatly exaggerated in this figure for clarity.

The 2-story, 1-bay steel moment resisting frame is modeled using "beam with hinges" elements. Plastic hinge regions are assigned to the ends of these elements. The plastic regions have an elastic axial response and a bilinear rotational response based on the Modified Ibarra Krawinkler Deterioration Model. An idealized schematic of the model is presented in Figure 2.

Features Common to Both Models

A leaning column with gravity loads is linked to the frame by truss elements to simulate P-Delta effects.

To simplify this model, panel zone contributions are neglected and plastic hinges form at the beam-column joints, i.e., centerline dimensions are used. For an example that explicitly models the panel zone shear distortions and includes reduced beam sections (RBS), see Pushover and Dynamic Analyses of 2-Story Moment Frame with Panel Zones and RBS.

The units of the model are kips, inches, and seconds.

The basic geometry of the frame is defined by input variables for the bay width, height of the first story, and height of a typical (i.e. not the first) story. These values are set as WBay = 360”, HStory1 = 180”, and HStoryTyp = 144”. The leaning column line is located one bay width away from the frame. In addition to the nine beam-column joint nodes, there is one additional node for each spring, which connects the spring to the elastic element. This makes a total of 24 nodes in the structure for the concentrated plasticity model compared to 12 nodes in the distributed plasticity model.

The leaning columns are modeled as elastic beam-column elements. These columns have moments of inertia and areas about two orders of magnitude larger than the frame columns in order to represent aggregate effect of all the gravity columns (Aleaning column = 1,000.0 in2 and Ileaning column = 100,000.0 in4). The columns are connected to the beam-column joint by zeroLength rotational spring elements with very small stiffness values so that the columns do not attract significant moments. These springs are created using rotLeaningCol.tcl.

Truss elements are used to link the frame and leaning columns and transfer the P-Delta effect. The trusses have areas about two orders of magnitude larger than the frame beams in order to represent aggregate effect of all the gravity beams (Atruss = 1,000.0 in2) and can be assumed to be axially rigid.

The rotational springs capture the nonlinear behavior of the frame. As previously mentioned, the springs in the example employ a bilinear hysteretic response based on the Modified Ibarra Krawinkler Deterioration Model. Detailed information about this model and the modes of deterioration it simulates can be found in Ibarra et al. (2005) and Lignos and Krawinkler (2009, 2010).

In this example, the zeroLength spring elements connect the elastic frame elements to the beam-column joint nodes. The springs are created using rotSpring2DModIKModel.tcl.

In this model the plasticity is distributed over a defined length. The axial and flexural responses of each plastic hinge region are defined as separate sections. The axial response is defined by an elastic section while the flexural response is defined by a uniaxial section using the bilinear material based on the Modified Ibarra Krawinkler Deterioration Model. The responses are combined into a single section using the section aggregator command. P-M interactions are neglected in this example as the axial loads are relatively low and are not expected to have a significant influence.

Plasticity Features Common to Both Models

The input parameters for the rotational behavior of the plastic hinges in both models are determined using empirical relationships developed by Lignos and Krawinkler (2010) which are derived from an extensive database of steel component tests. Alternatively, these input parameters can be determined using approaches similar to those described in FEMA 356 (http://www.fema.gov/library/viewRecord.do?id=1427), ATC-72 and ATC-76 (http://www.atcouncil.org/index.php?option=com_content&view=article&id=45&Itemid=54). In order to simplify the model, cyclic deterioration was ignored. This was accomplished by setting all of the “L” deterioration parameter variables to 1000.0, all of the “c” exponent variables to 1.0, and both “D” rate of cyclic deterioration variables to 1.0.

Stiffness Modifications to the Plastic Hinges (Both Models)

Note that this is a corrected version of Equation B.5 from Ibarra and Krawinkler (2005).

The frame columns are fixed at the base, and the leaning column is pinned at the base. To simulate a rigid diaphragm, the horizontal displacements of all nodes in a given floor are constrained to the leftmost beam-column joint node using the equalDOF command.

The mass is concentrated at the beam-column joints of the frame, and each floor mass is distributed equally among the frame nodes. The mass is assigned using the node command, but it could also be assigned with the mass command.

In this example, lateral loads are distributed to the frame using the methodology of ASCE 7-10 (http://www.asce.org/Product.aspx?id=2147487569). Lateral loads are applied to all the frame nodes in a given floor. A plain load pattern with a linear time series is used for lateral load application so that loads increase with time.

The recorders used in this example include:

To record the moment and rotation histories in the springs, the region command was used to assign all column springs to one group and all beam springs to a separate group, and the region was used as an input to the element recorder.

The pushover analysis is performed using a displacement-controlled static analysis. In this example, the structure was pushed to 10% roof drift, or 32.4”. The roof node at Pier 1, node 13 in Figures 1 and 2, was chosen as the control node where the displacement was monitored. Incremental displacement steps of 0.01” were used. This step size was used because it is small enough to capture the progression of hinge formation and generate a smooth backbone curve, but not too small that it makes the analysis time unreasonable. 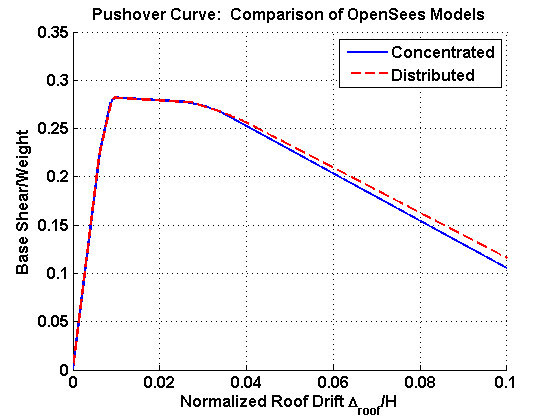 The results of the pushover analyses from the OpenSees models are shown in Figure 3. This figure shows the normalized base shear (base shear divided by the weight of the structure) versus the roof drift (roof displacement divided by the roof elevation). The models are nearly identical until about 2.5% roof drift when their curves begin to diverge. The descending branch of the the concentrated plasticity model is slightly steeper, but the two models agree reasonably well as there is less than 10% percent difference in the base shears at 10% roof drift. 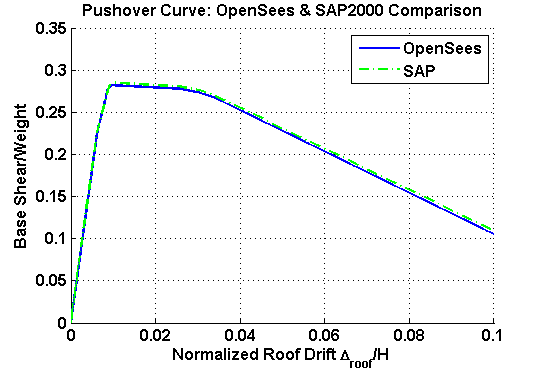 The results of the pushover analyses from the concentrated plasticity OpenSees model and the SAP2000 model are shown in Figure 4.The OpenSees and SAP2000 models agree very well as the difference between their base shears at 10% roof drift is only 4%.